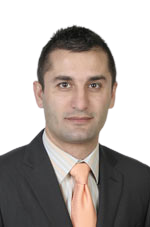 Born on 11th of April, 1971 in Sofia. Graduates 114 AEG in 1990, after which acquires a Masters Degree in 'Teleommunications' from the Technical University - Sofia. Works as an IT expert in the Network departments of BTC and IBM in Sofia. From January, 2000 until the end of 2004 is Country representative for Bulgaria of AT&T GNS, one of the largest telecommunication companies in the world.

In 2005 graduats the Master of Business Administration (MBA) program at INSEAD, France. In the following years works as a Project manager in the international department of the Italian electricity company - ENEL SpA in Rome and the licensed gas transmission operator - 'Bulgartransgaz' EAD in Sofia. In 2010 attends the licensing program - 'Consultant in European Projects' of American Univesitet in Bulgaria (AUBG).